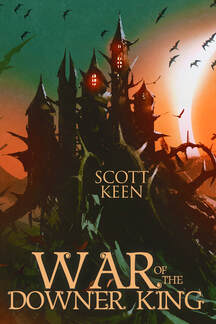 Now that Crik and the Downers, once-slaves of Ungstah, have arrived safely in the village of Arined, they can breathe freely for the first time in their short lives.

However, unbeknownst to them, the specter of Sulfus the gaunt king and the witch of Ungstah looms over their new home, the last vestige of safety in the Northern Reaches.

Meanwhile, in Ungstah, Durgan, former Captain of the Watch, and those left behind, prepare for their final assault against Sulfus, knowing his fall is their only way to freedom. But as each day passes and lives are lost, the uprising begins to falter.

Aniel, a messenger from the Eastern lands, knows that time is running out as she searches through the dark past of an ancient king in the hope of finding a clue to the mysterious origins of Sulfus and the King’s Eyes.

How long can Crik and his companions hide from Sulfus and the King’s Eyes? Will Durgan and the Branded have the strength to topple a throne? What secrets will Aniel find? Will it be enough to overthrow a king and free the Downers once and for all?

It all began with a child. It will only end with a war.